The Spirit of Generosity – United Way Kicks Off 2021 Campaign 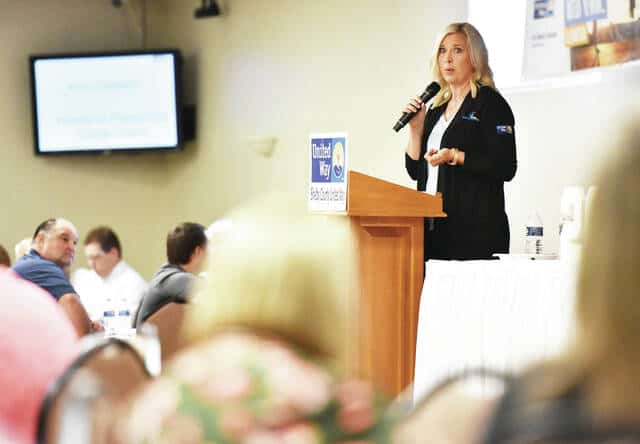 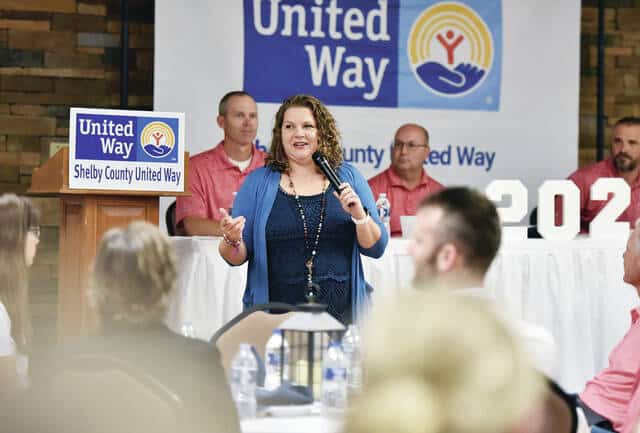 during Thursday’s 2021 campaign kickoff at the Palazzo in Botkins.

The theme for this year’s campaign is “The Spirit of Generosity.” Due to the continuing pandemic conditions, no goal was set for the campaign.

During the 2020 campaign, meetings were held virtually and no in person employee presentations were held, said Barr.

“Partner agencies had increased client demand and many had to modify how they operated,” he said. “Eighteen thousand unduplicated residents were served last year by a partner agency or program. This was an increase over the 17,000 served in 2019.”

There was an increase in victimization and domestic violence. At the peak of the pandemic, the shelter was full daily and hotel rooms were use for overflow.

“I personally want to thank all partner agency leaders, staff and volunteers for their dedication and commitment to our community,” he said. “They rang the bell and served our community. They were open every day.

“From a revenue standpoint, we were beyond thrilled that we raised $1,250,000 last year in spite of the before mentioned changes,” said Barr.

The 2020 campaign was down 8% from the year before. But partner agencies and programs received similar or unchanged annual investments thanks to past United Way board members prudent fiscal expectations which allowed the current board to use reserves to ensure allocations stayed consistent.”

Barr said he and the board are challenging the local companies to have a bounce back year in 2021.

“If a company’s results were similar to 2019 totals, we are asking them to forge ahead,” said Barr. “If their 2020 totals were down, we are challenging them to try and bounce back. We realize we my not get all the way back in just one year, but will certainly try. For a second year, a campaign goal was not established. We are hopefully confident we can have another strong campaign despite the delta variant, was we all try to move the needle forward.”

The campaign is starting at $150,746 thanks to the pacesetters campaign.

Speaking at the kick off were Kelly Edwards, career coach with the Workforce Partnership of Shelby County, and Emily Neu, board chair of Mercy Mission House.

Edwards shared the purpose of the program is to coach high school student who — after graduating — are planning to enter the workforce. This in turn will help strengthen the Shelby County workforce, she said.

She works with all school districts in Shelby County. She works with the school counselors and meets with students on a quarterly basis. She met with 100 students last year. After they graduated, some entered the military, some went to college and others entered the workforce. She helped them job shadow at a prospective company.

She said one of the success stories of the program involves a 17-year-old who was graduating from high school early. The student was walking 45 minutes to a fast food job. The parents had moved and he was living with his sister. He had no driver’s license or state ID. Edwards reached out to Workforce Partnership company. The student went to an interview and was hired. He know has a 15 minute walk to work and his salary increased.

Neu said she served on the Alpha Community Center board and saw a need for a shelter. She got involved with the Mercy House Mission on the ground floor. In July 2020, a meeting was held with all the county’s nonprofit organizations and it was pointed out there was no shelter in the county.

Renovation on the buildings started June 6. One building will open Oct. 4 with the Alpha Community Center and Holy Angels Soup Kitchen. Another building is housing Bridges Community Action and Family Resource Center.

“The $150,000 gift from the United Way was the biggest gift they’ve ever given,” said Neu. “We knew it was important to have the United Way behind us.”

The group is still fundraising to help cover operating expenses, she said, as the group’s 501C3 status hasn’t been approved yet due to the backlog caused by the pandemic.

Interviews are underway for a director of Mercy Mission House.

The United Way campaign will conclude on Thursday, Nov. 4, with a celebration from 11:30 a.m. to noon at the Sidney American Legion.