The Legacy of One Man 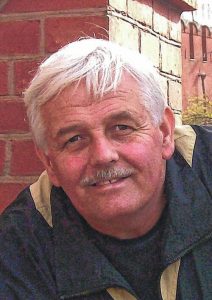 The dream of one man will continue to feed thousands of Shelby County County residents. The Rev. John Geissler, who founded Agape Distribution in 1996, passed away Nov. 14 after a battle with cancer.

Geissler recognized the importance in assisting local residents affected by food insecurities in providing the basic necessities for them. Each year, more and more families are served through Agape. His motto for the organization was “We make it hard to go hungry.”

“Rev. John Geissler, CEO of Agape Distribution or Pastor John as he was known to most, had a passion and vision to reduce food insecurity for our community,” said Bruce Boyd, an Agape board member. “His mission for making it hard to go hungry has provided 3.5 million pounds of food to the needy of Shelby County. Above and beyond feeding peoples bodies, this big man with an even bigger heart, has feed many souls. He was a gifted storyteller with a ready smile and was always quick to give a hug as needed.”

Boyd, who served as interim director of Agape during Geissler’s cancer battle, added “John was guided by a key scripture from Matthew 25 verse 35, ‘For I was hungry and you gave me food, I was thirsty and you gave me something to drink.’ His dedication to providing hope to the hurting is a legacy that all the Agape staff and volunteers are committed to carry on in honor of this great man of God.” 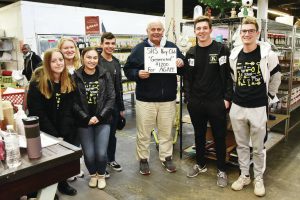 Marion Spicer, executive director of the Community Foundation of Shelby County, worked with Geissler through the years. One of the projects — Match Day — helped provide funds for needed purchases or projects at Agape.

“John’s ingenuity and vision were remarkable. He realized that corporations wanted and needed a partner to receive unwanted food and goods that could then be given to needy people or shared with other organizations,” said Spicer. “He went beyond Sidney by adding the mobile pantry that reaches the hungry throughout the county. He was blessed with a mind that knew how to make it all work and a positive attitude that inspired those around him. He will be missed!”

Spicer recalls one way Geissler’s influence will continue after his death.

“Another local grant maker and I met with John several years ago regarding his board, which was mostly inactive. He immediately took our advice by recruiting great, strategic and faith-filled local board members. Not only did those board members help John better the Agape organization, they helped prepare for a day such as this, so that Agape can carry on John’s important service to those in need.” 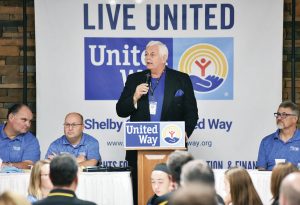 “John was an innovative visionary. He built a creative model that allowed a not for profit store to help fund the food pantry. His vision to provide a hunger safety net in Shelby County allowed thousands to be served annually,” said Barr. “John was humble and had a servants heart. His missions took him all over the world, including to third world countries and hostile countries towards western beliefs and Christianity. I was privileged to have known him and consider him a colleague. The amount of work completed by John and their board over the past four years to move the organization from a more mission based organization, to a fully operation not for profit organization will allow Agape to continue John’s legacy and mission. We thank both John, the staff and the board for their tremendous work.”

Geissler, said Barr, touched many lives in the county.Barr reflected on two stories about Geissler.

“I have two stories that make me smile when I think of John,” said Barr. “The first is him singing the Little Mermaid Song ‘Be a Part of Your World’ at our campaign kick off a couple of years ago, and at many company employee presentations. He wanted the clients being served at Agape to feel a part of our world. To watch the faces and smiles as John sang his mission was truly magical.”

The second story is one Geissler shared during tours of the center shows how he touched the life of one older gentlemen who benefit from Agape’s services.

“John shared that this gentlemen started coming in with a sock full of coins. He shared with John, he did not have much, but wanted to support Agape for the assistance he was receiving. And only as John could, he counted the money and with his big smile said what a wonderful blessing this is,” said Barr. “He shared that we can provide food for 15 cents a pound and you just helped us provide (and John did the math of what is donation would serve in pounds).

“The gentlemen came back regularly with the same sock and more coins. Then he stopped coming in,” said Barr. “A couple months later a younger gentlemen came into Agape with a sock of coins looking for John. He shared his father had recently passed and why he was dying shared to his son how important it was to take the sock full of coins to Agape to give to John. That is the impact John had and Agape makes every day.”

A better place to live

Sidney Mayor Mardie Milligan said the city and county are a better place to live because of Geissler’s vision.

“John followed his calling to serve others, and he did so remarkably throughout his lifetime. The legacy he leaves behind is one of caring and compassion. He established Agape distribution to feed the hungry and thousands of Shelby County families have benefited throughout the years,” said Milligan.

“Years ago we had several Presbyterian Church USA mission volunteers come live with us to assist with the Hispanic ministry at First Presbyterian. Usually staying a year at a time, part of their role was to get involved in ministry outside of the local church and volunteer in the community. I remember reaching out to John to see if he needed any volunteers and he welcomed them. He was always friendly and truly interested in their mission of serving others. It was a true match,” she continued.

“Sidney and Shelby County is a better place to live today because of the life work of John Geissler. He was joyful and inspirational. He will be greatly missed, however his legacy will live on as the team he has built will continue his faith driven work,” Milligan said.

Geissler and Agape worked with many agencies for the betterment of their clients.

“I am so sorry to hear about Pastor John’s passing,” said Helen Scott, LSW, Employment and Family Services administrator, OhioMeansJobs Shelby County and Shelby County Department of Job & Family Service. “He was such a positive part of our community. Our agency worked closely with Pastor John and Agape Distribution. Agape is a work experience site for our clients who are required to participate in a work activity component in order to receive their public assistance benefits.

“Pastor John always worked well with those who were placed at their site. He and his staff and volunteers taught not only work skills, but life skills to the participants,” said Scott. “Pastor John was also very caring and compassionate to those we referred to Agape for other needs and challenges that they and their families were facing. We, at Shelby County Job and Family Services, will definitely miss working with Pastor John, but the firm foundation he has built with Agape Distribution will stand in our community for years to come. We are very grateful for his ministry and will continue to work with Agape Distribution to assist the residents of Shelby County.”

His vision to feed Shelby County residents expanded into The Peoples Garden, which allows residents to plant their own gardens and grow their own food.

“Pastor John was instrumental in getting The People’s Garden started in 2013 and was always supportive, saying that it is ‘important.’ He accepted the idea of a community garden right at the beginning and introduced Michelle Stephenson and me so we could get it started by planting in the four raised beds we had,” said Conelia Dixon, who oversees the garden. “There are now 55 raised beds, five regular coordinators, and a Learning Center building with heat and air conditioning for classes, meetings and planning.

“The names ‘The People’s Garden’ and ‘The Learning Center’ both came from Pastor John,” said Dixon. “The mission of the garden has always been to 1st of all feed hungry people with fresh vegetables, to teach about gardening, and also to bring the community together. This has been pretty much the same mission as the food pantry… Feed hungry people with Agape love.”

A Memorial Service for Geissler will be held on Monday, Nov. 28, 2022, at 11 a.m. at Solid Rock Church, 2745 State Route 29, Sidney, with Pastors Rodney Reynolds and William Loudermilk leading the service. The family will receive friends from 10 a.m. until the time of service. Arrangements are in the care of Cromes-Edwards Funeral Home. In lieu of flowers, the family requests donations be made to Agape Distribution or The Joseph Connection.