Debra Geuy, former president of Peoples Federal Savings and Loan said, “this is exactly why the Peoples Board of Directors and I chose Farmers & Merchants State Bank as a partner. They understand the importance of playing a vital role in their community and their ability to make their community stronger.”

Scott Barr, president of the Shelby County United Way sai,d “We welcome Farmers & Merchants support of the United Way Annual Campaign and welcome them to our community. Together we will impact over 18,000 residents and improve the quality of life in Shelby County.”

“A community bank is only as strong as the community it serves. We are committed, through volunteerism and financial support, to insure that Shelby County is as strong as it can possibly be” said Brett Baumeister, regional president with Farmers & Merchants State Bank. 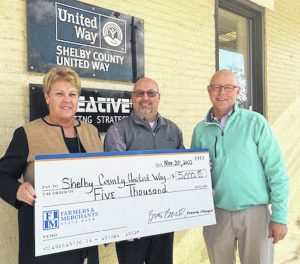 ← The Legacy of One Man Christmas Dinner Was a Success →